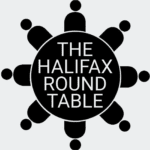 Welcome to The Halifax Roundtable: Episode 1.

The story of Halifax is set within the Alien universe. We are a team of five and we work together to tell the story. Our adventure begins in the year 2179, the same year that Ellen Ripley is recovered from the Nostromo, survives LV-426 and then is lost on Florina 161.

Alien RPG is a tabletop role-playing game that serves as the framework that guides us through our journey. Halifax: Precious Cargo betwixt Dragons and Ghosts is an original story based on a homebrew campaign written by Joseph Stader. Every episode features actual play with minimal editing.

Expect story elements regarding space-horror, sci-fi action, survival, and a sense of wonder. Gameplay consists of chance mixed with strategic planning. Every choice has a consequence. That is to say, the right choice leads to another day where the wrong choice leads to panic, injury, or death.

Welcome to Halifax. Buckle up, we are in for some chop.

The year is 2183. A little more than three years since the destruction of the Hadley’s Hope colony on LV-426, the disappearance of the USS Sulaco, and the closing of the prison and lead works on Fiorina 161. The loss of the Sulaco’s Colonial Marine unit along with these Weyland-Yutani sponsored outposts, and the implications of corporate foul play stemming from these incidents, have created an air of distrust between the company and the United Americas.

To add fuel to the fire, conflicts between the rival sectors of space have increased exponentially in the past five years. While unconfirmed, many believe that Hadley’s Hope was a test site for one of Weyland-Yutani’s bioweapons and that an enemy state sent a warship to nuke it from orbit. Others believe that the Company is working with a rogue nation to assume control of the colonies on the Frontier.